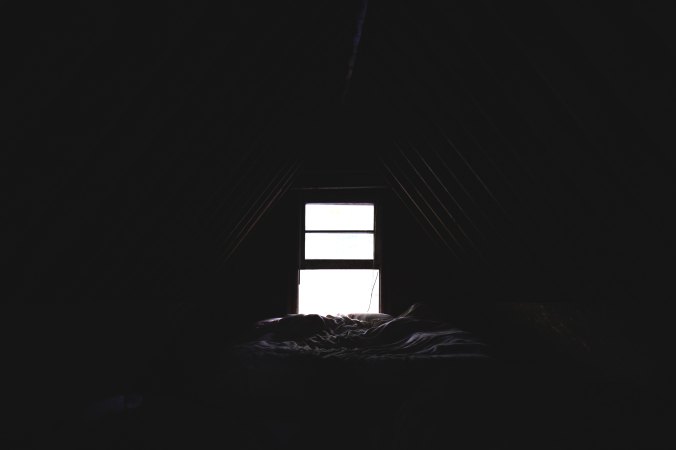 I don’t know what was up with the world this morning.

I was enjoying one of my favorite dreams: the one where I’m all alone on an island and my dishes and laundry disappear when dirty, and magically reappear all clean.

Instead of a blue-sky island dissolving to the usual wake-up call of pattering feet and yelling children, however, a far-off rooster’s crow drew me back. Hesitantly, I opened my eyes. A low, dark ceiling loomed above me, supporting a broken, swinging fan. Where did that come from? I wondered. I’d never owned a fan in my life, nevermind attaching one to my ceiling.

A shadowy object in the corner was the only other piece of furniture besides the strange bed beneath me. Gingerly, I slid off the dark covers and walked a barefoot tread across a dusty wood floor to investigate.

It was a vanity. I think. Given that ceiling fans were considered a luxury, I’d certainly never seen a vanity in person. The low desklike part, spindly stool, and oblong mirror fit some mental idea from my subconscious of its identity.

After such profound musings, I did the logical thing and sat before it. I glanced in the mirror, and inadvertently proved the stool to be more sound than it first appeared.

It fell to the floor as I rapidly fell off of it, causing echoing clatters of wood-on-wood in the tiny room. I warily approached the mirror again. It reflected the exact shock I felt, but the similarities ended there. Someone else’s disjointed, enlarged nose and blood-encrusted lips stared back at me from widened eyes -widened, bruise-circled eyes. Some other girl’s bumpy, hair-shorn head felt suddenly cold; then had the hand I raised caress it to be certain of its authenticity.

Just as I began to hope this new person was also prone to fainting, I heard the sound of carefree singing from somewhere beyond the wall I faced. Besides the off-key tune, I realized a regular, even tread of footsteps. Each noise seemed associated with the other and both drew nearer by the second.

Assuming nothing worse than a tone-deaf singer lay beneath the bed, I scurried over to it and quickly scampered into the clouds of dust and dirt it hid under its mattress. None too soon: a creaking sound and spreading triangle of light announced The Singer’s entry. Fortunately, he/she/it had stopped his/her/its identifying noise.

Right when I realized the obviousness of my hiding place, a weight pushed down on the bed and a large, green, ferocious, upside-down face leered directly in front of my view. Just before I released the loudest scream this side of Kentucky, the monster asked, “What are you doing under there?”