Today’s my son’s birthday. We were planning a birthday party for him, before. “You know this year you get to have a big party, right?” I’d said to him. “Make sure you’re thinking about what you want to do and the friends you’ll want to invite.”

Fortunately, my baby-surgery recovery and our other birthdays made it so we didn’t get past that point in conversations. I didn’t have anyone or anything reserved. We hadn’t invited people. All that happened is that, when Utah’s governor first announced the schools were closing, my son asked, “What about my birthday?”

“Well, we’ll plan to have it after school’s back in session. If things go longer, we’ll have it in September.”

Looking at maps of the spread of Coronavirus, I’m thinking we’ll push his party till next year.

Global case numbers are reported by the World Health Organization (WHO) in their coronavirus disease 2019 (COVID-19) situation reportexternal icon. ©2020 Centers for Disease Control and Prevention

Another event’s been affected by all this, for us. Kev (my husband) and I were planning on our first-ever trip to Europe. We had to commit to going last year, and have been paying toward it. I’ve also been stressing about it; thinking and praying about whom to leave which boy with for three weeks.

Although the organizers have not officially told us this is the case, we think it will be cancelled. More than the money is the idea that I was *this close* to something that’s been on my bucket list since I was a girl. Not much is still on that list, mostly because humans haven’t developed self-aviation.

We’re not the only ones affected. A friend complained about missing their family cruise. Another listed all the concerts she couldn’t attend. What whiners, right? There are people dying after near-suffocation from a disease they contracted at Wal-mart.

But, we are not trying to be shallow. We are dealing with massive change.

My favorite example of this, pre-COVID-19, is in The Hitchhiker’s Guide to the Galaxy. <Spoiler Alert> Planet Earth is bulldozed to make way for a hyperspace expressway. The protagonist, Arthur Dent, escapes with Ford Prefect (an alien in disguise) just before the bureaucratic aliens known as Vogons blast us to nothing. Arthur is an Everyman. When Ford tells him what’s happened, he can’t grasp that Earth and everyone on it is gone.

“There was no way his imagination could feel the impact of the whole Earth having gone, it was too big. He prodded his feelings by thinking that his parent and his sister had gone. No reaction. He thought of all the people he had been close to. No reaction. Then he thought of a complete stranger he had been standing behind in the queue at the supermarket two days before and felt a sudden stab: the supermarket was gone, everyone in it was gone! Nelson’s Column had gone! and there would be no outcry, because there was no one left to make an outcry! From now on Nelson’s Column only existed in his mind. England only existed in his mind. A wave of claustrophobia closed in on him.

“He tried again: America, he thought, has gone. He couldn’t grasp it, He decided to start smaller again. New York has gone. No reaction. He’d never seriously believed it existed anyway. The dollar, he thought, has sunk for ever. Slight tremor there. Every ‘Bogart’ movie has been wiped, he said to himself, and that gave him a nasty knock. McDonald’s, he thought. There is no longer any such thing as a McDonald’s hamburger.

I remembered this quote as I drove around on my once-a-week errands, feeling a slight jolt at empty restaurants and neon signs about what part of which business was open. I remembered the quote while we watched LDS General Conference this morning; while the camera panned over an empty exterior shot of the building where 21,000 people would have been meeting.

General Conference, April 2019. Thanks to The Church of Jesus Christ of Latter-Day Saints for the picture.

The good news is that I think I’m through all the Stages of Grief now. I skipped from Shock to Depression, swung back to Emotionless, and am now resigned to Acceptance. My family and I are still here, are fine, and are just staying home. I can stay here in my own, four walls. I don’t need to worry about what if because those who are in charge have removed the stresses I had, outside of my four walls. If IT can stay outside those walls as well, then we’re set for months.

And, we’re making lemonade out of lemons. My son and his brother set up a Minecraft server and invited his classmates. We’ll wait and see what happens with Europe. The LDS church leaders are broadcasting from a small room, with their chosen speakers sitting six feet apart. 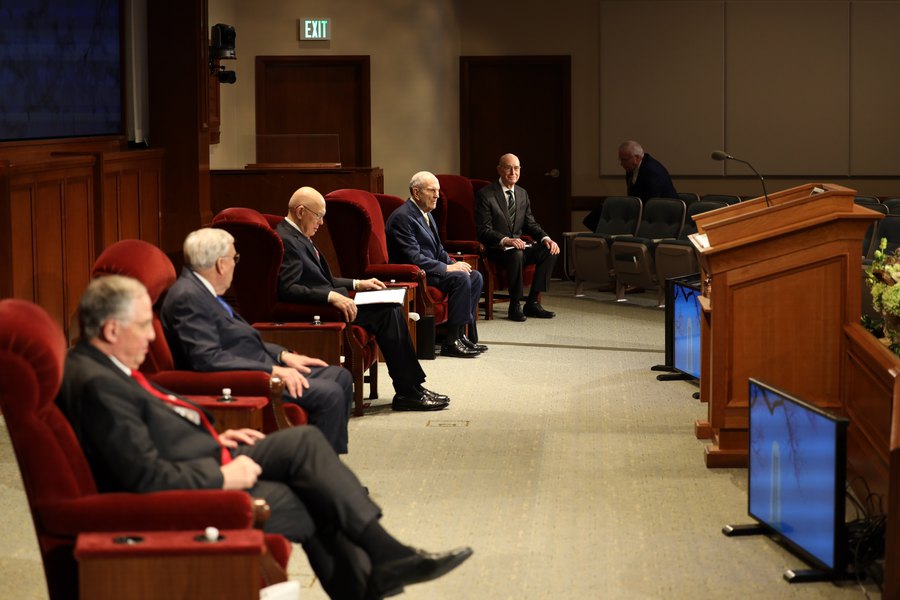 (Photo courtesy of The Church of Jesus Christ of Latter-day Saints) General Conference begins at a small auditorium in the Church Office Building with top leaders socially distanced amid the coronavirus pandemic. ©2020 The Salt Lake Tribune

I’ll bake a birthday cake and make enchiladas from the ingredients I picked up from my store order yesterday. I’ll wrap the presents our postman delivered. I’ll remember to look at this from my son’s perspective, because all he wants is a happy birthday.

I’m not talking airplanes, either. I’m talking: self-automated, magic flight. In my childhood nighttime dreams I’d run -fast, faster, faster!- till the momentum or movement or fairy dust accelerated my hopeful person into the sky.

I have other dreams, of course, but I fear to share them. I fear that voicing my wants, desires, and wishes will result in disaster. If, for example, I’d always wanted perfect vision, I wouldn’t tell anyone. Telling another would surely result in Fate crashing a car into mine and causing blindness, afflicting me with a genetic condition that affects sight, or causing one eye to randomly fall out.

Hey; it could happen!

As you can see, I’ve a real problem looking forward to things. From a psychological mush of my parents using upcoming events as rewards I might lose; my always putting others before me in true, selfless motherhood; and a desire to avoid the pain of disappointment, I do not anticipate positive events.

Instead, I numb. Instead, I cry. Instead, I sadly shelve my glowing orbs of potential dreams and tell myself to look elsewhere.

And yet, I do have dreams. I think. Waaaaaay back in high school, our teacher had us make a bucket list of things we wanted to do in life. Mine included traveling to Europe, learning another language, and …I don’t remember.

Wishing and anticipating and doing were so much easier then -you know, before I had to wait for the ol’ money tree to produce something besides sour grapes.

How about you? Have you ever had a dream? Do you still? Do you share your dreams, or hold them like secret treasures?

Here be what I wrote in the past week:
Wednesday, October 30: Opened up about the elephant in the room in “Depression and Donuts (and an Elephant).”

Also, wrote an entry for this year’s contest, “Scampy Mouse.”

Sunday, November 3: “The Healthy Benefits of Popcornopolis,” in response to reading the front of my favorite, very unhealthy snack.

Monday, November 4: An inspirational quote by Charles Bukowski, in the form of his poem.

Kevin Parish at What Words May Come gifted me The Sunshine Blogger Award. Thanks, Kevin!

Mostly I use this next part to introduce any of my readers to any of my other readers whom I find excellent to read. The main snag is that I’ve already ‘nominated’ a fair number here, here, here, here, and here. If you’re looking for some great sites, scroll down to the bottom of those links and also check out these:

If any of you whom I’ve named get the notification and wish to respond, here are my questions:

3. Answer the 11 questions given to you

“When I abandoned all aspects of self, and melted into you, I thought, how can I lose you, if there is no distinction between where you end, and I begin?…

“No, I haven’t forgotten you- I just remembered me.”

-Violet Lentz, “Note to the Netherworld“