-One of those ubiquitous internet quotes

I’m a bit tardy posting today. I’d tell you my life story, but I know you’ve already skipped to-

All right, all right. The winner this week is Peregrine Arc.

One more minute, I snore
One more minute soon turns into four.
Six am workouts sound so good on paper, when imaginary me’s do all the work.
Can’t I clone myself or snooze my way to fitness? I squirm and think.

Out I put my foot, my toe wiggles ’round.
It’s my radar scanner to see if all’s safe and sound.
It touches the floor, the rest of me still covered up in bed.
Brr, ’tis cold, brr shivers and shakes alive!
Back into bed, abandon ship and this dread!

Isn’t there a clause in the Constitution,
against cruel and unusual punishment such as these coming to fruition?

It’s for my health, it’s for my well being
I’ll get up in second, and do some….more…pleading.
Zzzzz…..

Congratulations, Mama Arc! You are the most terrible poet of the week!

Whenever I enter writing contests and the host/hostess says, “You were all so good; I just couldn’t choose,” I know she’s saying a load of crap. Yet, here I find myself thinking it nearly every week. You guys are getting so ‘good’ at being terrible poets. Pat yourselves on the back for the dubious honor; you deserve it.

We can’t literally all be winners, of course, which is why Peregrine Arc scooped you this week. Other poems had plenty of elements that were so. darn. clever. I chortled. I cringed. P. Arc’s terrible rhymes, meter, message, and overall relatability got her in to contender status. I believe the overall poem is what bumped her to first for me. There’s just something universal about the thing, even though it’s a bit of a Frankenstein’s monster in its final form.

As to the rest of you, let’s get these things cross-stitched and hung on Etsy walls. Read them all below, and try not to laugh:

Keeping Your Head When All About You are Keeping Theirs

A lazy man from Orleans
Slept upon a guillotine
The townspeople said, “Find some other bed;
if you sleep there much longer, you’ll lose your head”
Despite the people’s entreaties and pleas
He was only interested in catching some ‘Z’s
He finally compromised with the people of the town
And said, “So, wake me when the blade is half-way down…”

I started off
Dangling the proverbial carrot
Buying a new truck- for work of course
Promising my undying support,
Because he knew he already had my love
When that didn’t work I tried reason
“I’m working three jobs
Buying the food
Carrying it in the house
Cooking it
Washing the dishes
What may I ask is wrong with this picture?”
Sly little smirk,
Toss of the head
Walk out the door was his only response.
Eventually the level of frustration was so-
That even I got tired of listening to myself
Sliding down the back of the bathroom door in tears
“You can’t go through life being nothing but a good…”

Now Cyril, you should be studying for your exams
and not sit around eating yams.
It’s driving me crazy that you are so lazy;
why can’t you be more like your sister, Maisie?
When you grow up and get married, I bet
you’ll get your wife to light your cigarette.
I shouldn’t have to articulate
that you need to motivate.
Get inspired by your sister rather
than obviously taking after your father
who is the laziest son-of-a-B
that nature ever could concei-
-ve. Frankly I’m at the end of my tether,
and you think that sitting around doing nothing makes you clever.
Maisie is an inspiration to us all,
and she’s already, at her young age, starting to be able to crawl.
And Auntie Doris, who frequently gets constipation,
should be another source of inspiration.

I knew this guy named Bart.
He was lazy, couldn’t get him to start.
To get him in motion,
without causing a commotion,
I walked by him and dropped a big fart.

I knew this guy named Bart.
He was lazy, couldn’t get him to start.
To get him in motion,
without causing a commotion,
I walked by him and dropped a big fart.

A Sloth Stuck In Tar

I can’t even believe
your hebetude
All day long I grieve
You said you’d move
You said I’d approve
I dared you to prove true
But in my heart, I knew

Your lazy known to all
A sloth stuck in tar
Instead of stand, you crawl
But now it’s time to improve
From this, you’ll behoove
Let’s make a breakthrough
Find something to do
Please and thank you!

Go to the Ant

Go to the ant, thou sluggard
Says the Proverbs of a holy book
So I went to the ant and asked
Why was I told to come here
The ant said, with a sneer

I don’t have time to talk,
Do you hear?
I walk miles to find food for my queen
And if I come back empty legged
She screams: “where have you been all day?”
I die after working hard for a few weeks
Who told you to come watch me?
I’ll not motivate you, you lazy scum
Because if I do you’ll die real soon.
Go home and drink some rum.
The end!

Get out, don’t slouch

Laziness is only resting before working makes you tired,
so I’m writing this short poem before I get inspired.
This example will serve to show that being lazy
can motivate a terrible poem before it drives you crazy.

You’ve almost motivated me with your stories of laziness. I’ll post another prompt tomorrow; get around to it when you can and enter for next week’s glory and prizes.

P’Arc: D. Wallace Peach created this graphic that you can use (if you want) for a badge of honor as the winner:

Welcome to The Terrible Poetry Contest, a family tradition since about thirteen weeks ago.

Writing poetry is a daunting idea. We get in the mood, think of a lyrical phrase, and then run up against a metaphorical wall mid-stanza. While I have written a how-to on composing poetry legitimately, that’s not what this contest is about.

The Terrible Poetry Contest is a chance for writers of all shapes, sizes, and ability levels to make a rude literary gesture to all that is good and decent about proper writing and contests. It’s a chance to do everything your poetry teacher told you not to. It’s a chance to shine when other contest-hosters left you alone in the dark.

If this is your first time, review my how-to on terribleness so you know what to expect. Then, read the following rules and please, please, please share something truly terrible:

Post your poem in the submission form below, or include or link to it in the comments much farther below.

“New Year’s Resolution: To tolerate fools more gladly, provided this does not encourage them to take up more of my time.” –James Agate

Anticipation clung to my twitching legs. A girl nearby hopped; I copied. Another stretched, as did I.

We pretended to ignore the waiting barriers. We’d glance to the nearest, flit to the next and next and next, then end at the finish line.

Too soon, I heard, “Runners, take your mark.”

Out of the blocks, I ran to the first hurdle.

And sat and crumpled and cried.

Then, felt an arm about my shoulders. Heard a repeated lullaby of encouragement from a onetime friend.

“You won,” she reminded, “By not hesitating.

“I want to believe in the points of light we can all be when we spread kindness. It doesn’t remove the pain or gloss over the fear; it accepts that we have a choice in what we do next.” 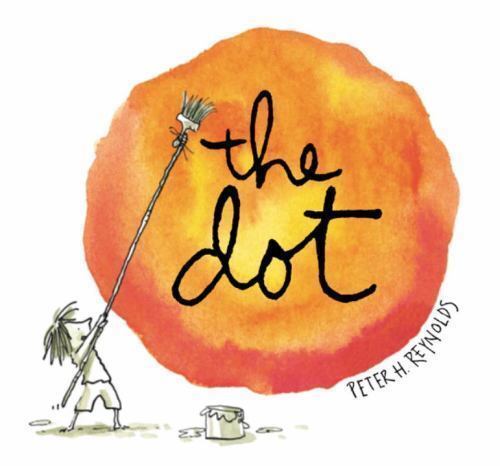 Whilst considering my favorite children’s books, I realized that most made the list based on favorites of my childhood. Not to become set in my old ways, however, I have found several excellent additions in seeking out books for the children I have since produced.

Such is the case with The Dot, by Peter H. Reynolds.

It tells the very simple story of a young girl named Vashti who is determined that she cannot do art. Her teacher, meanwhile, is just as certain that Vashti can.

I love how we get an idea of the personalities of the characters in a few lines of actions: Vashti’s practical stabbing of a dot onto paper shows her attitude, and her teacher’s encouragement and action of framing that first dot demonstrate understanding.

Teaching is, and has always been, a career plagued by under-appreciation. Teachers are responsible for connecting with a classroom or more of children, dumping information into little brains, and somehow still maintaining order. They also care for their students, cry about poor life situations, and think about hundreds to thousands of past lives they’ve been touched by.

The Dot is not just about a young girl finding courage to express herself. It is also the story of what every teacher aims for: a lesson learned, a life improved, and the benefits passed on to others.

It’s short, simple, sweet, artistic, and touching. If you haven’t, spend a minute reading it. Since it’s more recent, I even found readings of it online.

“Fear cannot kill you but it can stop you from living. It can stifle and stymie potential and ambition, preventing you from becoming the person you were created to be. But do you want to know a secret? Fear has a weakness, an Achilles heel, that when exposed and exploited will bring it crashing to its knees. That weakness is YOU. Which is why it hates you so much and devotes so much energy towards destroying you.

“You can conquer fear, overcome it and send it scurrying back to where it first crawled from. Fear is a bully. It hates to be confronted and exposed for the despicable coward it truly is. Stop running from it. Turn and face it. Raise your sword and strike it down dead in its tracks. Your sword is your story, your weapon the words within you that fear so wants you not to write….

You are the superhero you’ve been waiting for all this time.

“We are a tribe that fear cannot breach. Today I encourage you to embrace the freedom that is fearlessness. Throw off the shackles and stride out of your cell. Live your life and not a life sentence. Expose your fears for what they are. Write about them. For you are not alone anymore. Fear can be conquered. The resistance starts today.”

From “What Are You Afraid to Blog About Today?,” by Stephen at Fractured Faith Blog.